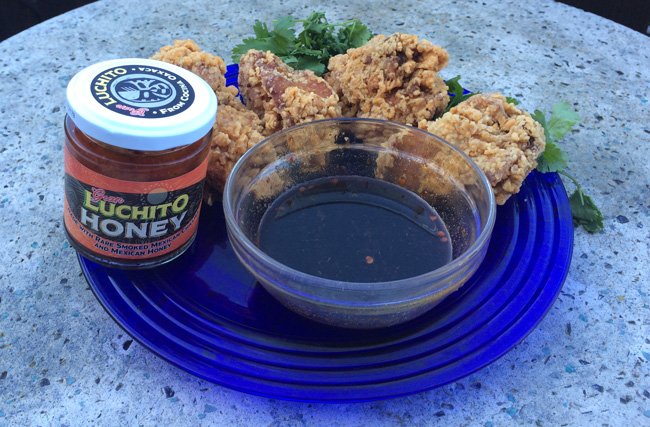 Here is a simple-to-prepare dipping sauce that uses  Gran Luchito Chilli Honey and is great for fried chicken, but you can use your imagination; how about pork sate? The recipe starts with the spicy hot honey that combines Pasiilla Oaxaca Chillies with honey from the Caribbean coast of Mexico.

This recipe was inspired by watching the PBS show, Mind of Chef and having some leftover fried chicken from an evening at a Korean restaurant. In one episode of this show about Kentucky, (Season 3, Episode 5 show preview) Chef Edward Lee, a Korean American who grew up in Brooklyn, but adopted Louisville, Kentucky as his home, described his love affair with fried chicken (youtube video). With his Kentucky-Korean roots, Chef Lee seems well qualified to elaborate on the culinary aspects of fried chicken. In this show, Chef Lee prepared Korean Style Fried Chicken covered with a sweet and spicy sauce. This simple sauce is loosely based on his recipe.

Bring to a boil and allow sauce to thicken slightly. Serve with fried chicken and cilantro.

Enjoying KFC chicken in a Korean restaurant with all Korean fixings.

Next post: A Sampling of Food Gifts for the Holidays