Last week in the blog, I briefly touched on the fact that Chelsea Market Baskets is now carrying a carefully curated selection of beers and hard ciders. We received our New York State Liquor Authority license and brought in a special buyer, Dale West Englebert, to consult on the new addition to the store. 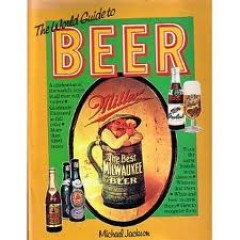 Craft beers have been steadily increasing in popularity in the New York City hospitality landscape – restaurants are offering more sophisticated beers to complement dishes, and beer at a dinner out is as acceptable as ordering a  glass of wine. Breweries have long been part of the New York City tradition, but like everything have waxed and waned in number due to influence from arriving cultures, availability of resources and public opinion (or law!). From 1850-1900, New York was the largest producer of hops, and to use all of the upstate growth, brewers of all nationalities, but especially German, tapped into the fresh water that was being funneled into city. When Prohibition shut the doors of the bigger breweries, the general interest in beer waned because it was easier to distill hard liquor than homebrew. Post-Prohibition beer consumption was marked by big brand distribution- names like Rheingold, Anheuser-Busch, Pabst, Miller, and Coors absolutely dominated the market.

Now, I did a good bit of reading for this post, and couldn’t find a pivotal moment when all of a sudden craft beers took off, but several current brewers, including Sal Pennacchio of Yankee Brewing Company, cited Michael Jackson’s book The World Guide To Beer to opening their eyes to the depth that beer can have!

Whatever the catalyst, New York, both city and state, is now home to a flourishing industry of beer makers, and CMB proudly carries the most unique, interesting, and quaffable varieties.

Here is our current offerings with some tasting notes – like everything in our store, our assortment will change with the season:

With so many beers on tap*, it can be a challenge to choose a favorite, but here is a recommendation from Dale: 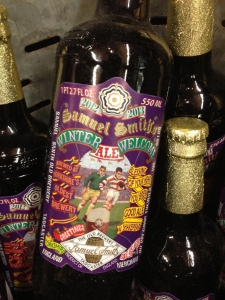 “One of our seasonal beer offerings is Samuel Smith’s Winter Welcome Ale. The brewery in Tadcaster, UK, was established in 1758 and is Yorkshire’s oldest brewery. This seasonal beer is a limited edition brewed for the short days and long nights of winter. Winter Welcome Ale also has a collectable label. The picture in the middle of the label changes every year. Samuel Smith’s was the first brewery to register with The Vegan Society in January 1998, and this beer is entirely free of animal involvement, whether for the purposes of ingredients or animal testing.”

Interesting beer that tastes great? Sounds like our hallmark for all specialty foods and products at CMB!

And, we’ll keep looking for the best lines to keep our collection current: for professional development and new product scouting, there will be no better education than attending New York’s Craft Beer Week (from Feb 22nd-March 2nd). See you then, but hope to see you sooner at the store!

*Technically, none of our beer is on tap, but it is all bottled for purchase and will need to be chilled for most enjoyable consumption.

Next post: Spice Up Your Kitchen with The Art Of Spice Blends