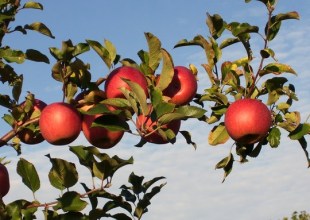 Every year in October, I get the urge to recreate a J.Crew/ Real Simple magazine spread and go frolic in an orchard- preferably with the reward of bringing home a bushel of apples and a pumpkin to carve! But this year, my October weekends are already claimed with weddings, football games in hometowns (yeah Steelers!), a homebrew party for Oktoberfest (which, yes, is nearly over once October arrives despite the name) and a visit from out-of-town friends who want to stay in the City. Luckily for me, even if I can’t pick-my-own, I can still partake in the bounty of New York State’s harvest season because CMB carries Red Jacket Orchards Apple Cider and Juices in the store, and this Fall we’re expanding to include their fresh produce in several of our gift baskets!

Red Jacket Orchards is a long-standing, beloved New York State brand: ask any Greenmarket shopper what they think about the apple cider, fuji apple juice, or cherry stomp, and you’ll inevitably hear a cascade of superlatives like, “most delicious,” “cleanest flavors,” and “can’t live without!” They aren’t alone in their praise, ZAGAT Survey in 2010 named the juices, ciders and nectars: “Best-on-the-planet,” and the New York Times, New York Magazine, and Better Homes & Gardens have all featured Red Jacket Orchards in glowing reviews and recommendations. Red Jacket Orchards is located in Geneva, NY, which is part of the Finger Lakes Region, and it has been in the Nicholson family since 1958 when it was purchased by Joe Nicholson, Sr. and his wife, Emily. Today, the second and third generations of Nicholson’s run the Farm Store, Greenmarket booths, and tend to the orchards! 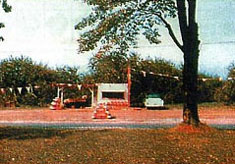 Sourced from the RJO website, this is a great photograph of the original, partially open air, roadside fruit stand from the 1950s. 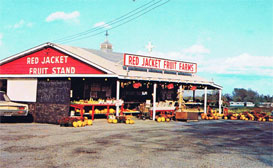 This image is the updated Farm Store with walls and sheltered patios from the 1970s. 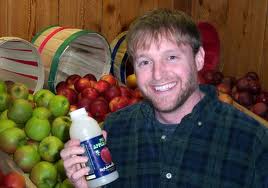 Year-round, CMB carries Red Jacket Orchards’ Juices: Premium Apple Cider, Cranberry Apple Cider, Fuji Apple, Strawberry Apple, and Raspberry Apple Juice (12oz, $2.95). The ciders and juices are 100% from fruit, cold-pressed and unfiltered, with no water or sugar added, and never from concentrate. Look for the bold branding in our refrigerator case, and you won’t be disappointed with the bright, simple fruits.

And, if you love to eat your apples, instead of drinking them, CMB is featuring Red Jacket Orchards Honeycrisp Apples in our new Fall Baskets. 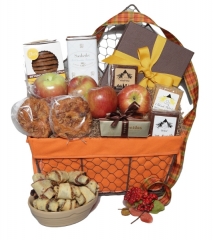 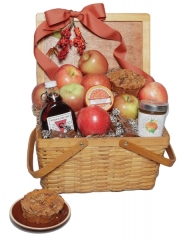 If you’re looking for an open-and-eat option, our new Fall Harvest Basket ($69) includes Bequet’s Cinnamon Swirl Caramels, but can also be enjoyed as a leisurely breakfast or snack! Spread the Pumpkin Butter with maple on a mini coffee cake and brew a mug of warm Cranberry Autumn Tea to embrace the seasons finer flavors.  The bounty of the season is captured in the bounty of this basket: Woods Cinnamon Cider Syrup (8oz), Honey Crisp Apples (8), My Grandma’s of New England Mini Coffee Cake (1.2oz), Bequet Cinnamon Caramels (4 oz), American Spoon Pumpkin Butter (9oz), and Harney and Sons Cranberry Autumn Tea (5 sachets).

Happy Fall, and see you soon at the store!

Next post: More Than Meets the Eye: Dinner at Rosemary’s

Previous post: Fall for Honey (and honey recipes for Fall)!