More Than Meets the Eye: Dinner at Rosemary’s

Chelsea Market Baskets owner, David Porat, has a regular monthly column in the WestView News, a paper that serves as “the voice of the West Village.” After traveling in Provence for August’s article, he’s back in New York, and pleasantly surprised by a trendy new restaurant in the West Village and the passionate, food-loving owner. 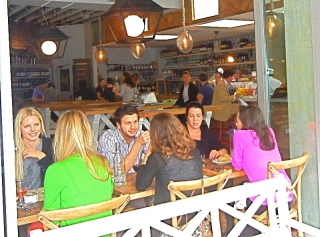 I walked by the corner of Greenwich Avenue and 10th Street about a month ago and wondered where this new buzz came from, but figured I should just keep walking. Concurrently, friends were saying that I needed to go to Rosemary’s, yet another Italian restaurant, in the West Village and then George Capsis said we must write about this new place. Well, I am happy to report that we had a very satisfying meal there last night and at the same time managed to learn the origins of Rosemary’s. 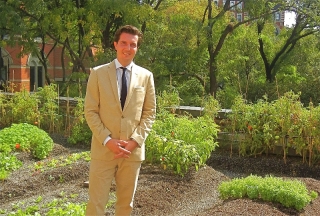 This heavily trafficked corner, which had been a bakery a long time ago and then a party supply store in recent memory, has been gutted and transformed into an airy, rustic, Enoteca and Trattoria with the help of Deker Design. It was created by Carlos Suarez, a young restaurateur, whose first restaurant is Bobo, a bit further west on 10th Street. Carlos’ mother is Rosemary, who lives in Lucca, Italy with her husband and has infused in her son a love of great food and many things Italian although of English and American decent. Carlos went to boarding school in England and then to Penn. He pursued a career in finance but quickly gave it up for his love of good food. Wade Moises is a chef that Carlos networked himself towards, who spent a good bit of time in Italy, particularly in Puglia and Sicily and his food reflects a rustic country aesthetic that is thoughtful, not too far a flung and not too much tomato. Prior to spending time in Italy, he spent some time at Babo and helped open Luppa and worked at Eataly. In speaking with him, I was struck by his lack of pretense and passion for food. Carlos, Wayne and a second floor rooftop farm, where since the restaurant has opened in June, has grown herbs, tomatoes and other ingredients, all make for a winning formula. 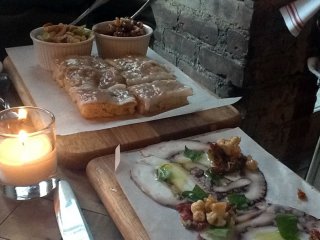 Rosemary’s has a relatively simple menu of smaller plates and various a la carte options. You could order less and eat inexpensively, but it is hard to resist, especially after tasting the anti-pasto. To start, we ordered Calamari and the Octopus Salame (both $8.00), Lardo Focaccia and Eggplant Coponata ($5.00 or three verdure for $12) and we were completely won over. The calamari is room temperature and prepared with celery, almonds, raisins and chili oil, in the form of salad; it is clean, bright and a great mélange of texture. The octopus was pressed together and sliced very thin to create a mosaic affect and garnished robustly with “Sicilian gardiniere” and basil from above! The caponata and focaccia were both perfectly cast, with a great multitude of flavor.

There are pastas, plates for two and secondi plates as the larger ticket items and range from $12 to $80 for a Bistecca Gran Mela or an NY Strip. We ordered the Linguine with Preserved Lemon, Pickled Chili and Parmigiano which was unusual and wonderful tasting. Perfectly cooked pasta in an almost invisible sauce that tasted of lime and with a rich savory flavor accented with a bit of chili; it is great when something so simple can taste so good! We enjoyed the Lamb and Porchettina ($23 and $22 respectively) as our Secondi course. Both were plated beautifully and were more complicated dishes that did not work quite as well as with what we started. The lamb combined medium rare leg of lamb with braised greens, sheep’s milk ricotta and roasted peaches. It all worked well together but suffered a little because after spending some time admiring how it looked, it was closer to room temperature. The pork tenderloin was wrapped in pancetta, garnished with crackling and accented with frutta mostarda and fennel. I found this dish to have too many things going on of which you did not taste components enough, but it looked great.

Dessert was Olive Oil cake with blueberry compote and whipped cream. This, a light cake with a subtle olive oil and lemon flavor and crisp edge, was perfectly balanced with blueberries and whipped cream. Wine is simplified to about 30 wines, all available at $40 a bottle and most at $10 a glass. I had a very pleasing glass of “Prosecco on Tap” which the menu points out is earth friendly and does not involve any bottles or corks. 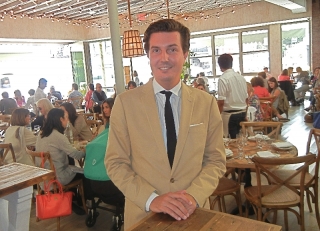 The restaurant is stylish, well priced and very easy to eat lightly in, if you have the discipline not to order more off the price friendly menu that includes cheeses and salads and obviously appeals to many people’s feminine side; George remarked that Rosemary’s was filled with young, stylish women. The one problem is that they do not take reservations at this point for any parties and if you go when many of the trendy people go, you will have to wait. We ate there on a Monday night at about 6pm, when there was no wait but the restaurant was surprisingly full. If you can eat early which is healthy and during the week, you are especially in for a treat at Rosemary’s. 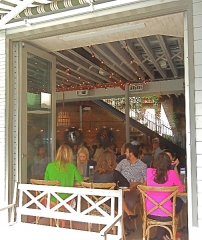 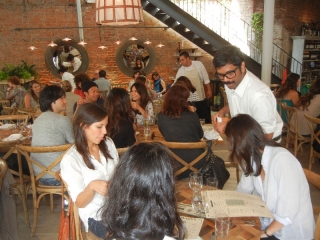