A New Cookbook and Before Summer Ends! 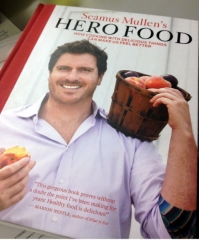 Chef Seamus Mullen who is a bit my hero now, just authored a book named Hero Food, How Cooking with Delicious Things Can Make Us Feel Better ($35.00). I saw it at the gift show last week and decided to order it right away. Just a week later, we now have it in stock-something I will be reading very shortly. The book is based on cooking healthy Spanish cuisine with a rustic farm to table flare. The book is broken into chapters that represent one ingredient, such as almonds, grains, squash and carrots.

I am a fan of Seamus Mullen and have eaten many times at Trutulia on 6th Ave. I have even hosted a dinner at the chef’s table earlier this year, which was impressive. The place, in true New York fashion does not look like much from the outside but the service, the food, and the experience is all great; aside from it being loud and as an older person I lament… why do all these young people have such good taste and abundant money?

I was happy to hear that Seamus is helping oversee the seasonal restaurant in front of the Standard New York, a few blocks south of here. Of course I had to check it out and I was truly impressed by what was offered. It’s classic tapas food that is presented well and generously. The photos below represent the menu, which includes cured Spanish Ham; grilled swordfish, summer squash, and castel vetrano olivada; and grilled prime rib steak aged for 40 days. What inspired me the most was the tomatoes, smoked burrata, watermelon and quinoa salad, since I had it; I have made many renditions of the salad. The outside restaurant will be closing on September 30th, so head over there soon. 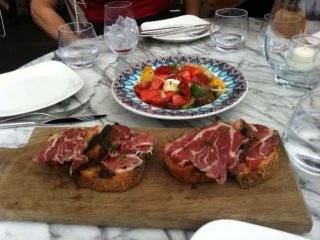 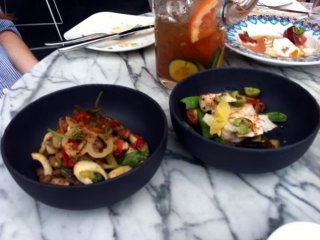 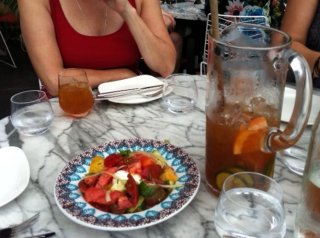 Also in our neighborhood, worth mentioning in the fleeting days of summer is a new market opening September 1st called UrbanSpace Meatpacking, in the lot just north of The Standard hotel.

Finally, the people who sing the praises of Riesling, Hearth and Terrior opened a new venue: Terrior on the Porch, where you can eat and drink well, literally right above Chelsea Market on the Highline at 15th Street. 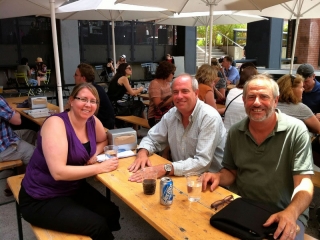 So, go out and enjoy the last few weeks of summer with some al fresco dining.

Next post: The Great Minnesota Get-Together: What’s on Your Stick? A Food Guide