Hong Kong- New York – It is a Small World After All!

Chelsea Market Baskets owner, David Porat, has a regular monthly column in the WestView News, a paper that serves as “the voice of the West Village.” Usually written about restaurants in the West Village, but this month, documents travel in Hong Kong and China for two of the largest gift and basket trade shows in the world, where dining out was a little different, but, as always, very entertaining and very tasty.

Sitting here, in a modern hotel on the other side of the world, twelve hours time difference, day is night and night day – yet the world is growing smaller and maybe better? I have just finished six days in Hong Kong and Guangzhou; I have been here many times before and dinners are some of the more exciting things that I do while I am here. The business of developing products and reviewing with vendors is also fun and challenging, with a bit of never knowing what you will find and how things will end up, but that is for another story and time. The food finds are immediate and most exciting in the present. Having friends who do similar things, both for business and pleasure, I relied on my London friend Paul to advise me on where to go now in Hong Kong. Last night and the night before, I ate on the island side at two maybe more current places. 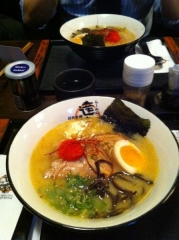 The first night we explored a residential area not far from Central that is now being developed with trendy food and has been written about; it is called Tai Hang. It is not unlike a part of the Village with a multitude of ethnicities represented in the establishments. It was filled with younger people; in fact I took a friend who lives in Hong Kong there and he was surprised at how all these new places sprung up. There was a good bit of French, including a restaurant with a great selection of cheeses on display, many that you could not easily find in New York. We choose a restaurant called Daruma Ramen House, a new place that takes ramen noodles to an art. The restaurant is very small and inexpensive, about $10 or 77 HK$ for a very satisfying bowl of a rich and spicy broth that includes pork, noodles, fish row, a semi hardboiled egg, and nori seaweed. The service is curt, the style is modern and this could be New York or Hong Kong. What I am reminded of here is how Ramen is happening in New York with some of the disciples of David Chang at Momofuko basically doing the same thing in New York. 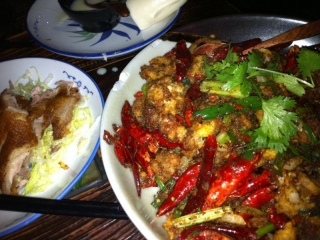 The second night we ended up on the mid-levels of Soho here, which is where a good bit of the night life is and where the famous bar called 1997 happened, pre-handover; I have found memories of pre-handover. Well I am happy to report that the place is thriving, looking like the most happening neighborhood, with what seems more like a moneyed melting pot. Based on my London friend’s recommendation, we went to Chilli Figara, also a very small place where the bathroom, or the one I was pointed to only had one option usage wise. It was very vertical, and the small modern sink right outside was also being used to wash water glasses. We made a reservation which was honored in the restaurant to which Michelin has given one star, to both their credits. This is Sichuan food or food from southwest China where the main city is Chengdu, a city of 14 million people that has a bleakness about it. In the May Bon Appetit magazine, an article about Sichuan food goes on to say that in 2010, UNESCO named Chengdu a City of Gastronomy, a title not given to Paris. Yes, partly about chilies and heat, but in fact the food is extremely varied employing “23 identifiable flavors and 56 cooking methods.” Food includes Ma and La elements or food to numb the pallet or the well-known Sichuan peppercorns and food that is hot or the La part which is a good bit about the chilies and the addicting excitement of hot food. I am happy to report that dinner was not too hot and we did order a good number of dishes that were presented in a good progression that included chicken in a hot bean sauce with cool cucumbers, roast duck with Sichuan pepper, pork, steamed bread served with condensed milk dipping sauce which provided a very pleasant foil to the heat and textures of much of the food, the high point visually and flavor wise were soft shell crabs, fried with little grease and lots of texture, tossed with chilies, scallions and some vegetables. When we paid our bill every table was empty but all had a reserved sign on them as opposed to when we arrived at about 8, and were filled with a mixture of people. As we left the place it quickly filled again with the later diners non-Chinese people, all seeming like they had been there before and were excited to come back, as I will be. This restaurant is not inexpensive and dinner for two was about $125 or 950 HK$, but we did live it up a bit. Interestingly, the Bon Appetit article goes on to say that Danny Bowien who opened the very successful Sichuan MCF or Mission Chinese Food in San Francisco two years ago, is about to open in New York a restaurant that is about accessibility, expense wise, and is of the people and celebrates Sichuan food.

There certainly are more traditional ethnic eating places. However, what seems to excite people in Hong Kong and similarly in New York are new places that translate earlier times food with a modern edge that makes dining and travel ever changing and fun. Whether having a foodie buddy or Yelp or other social media help, exploring and finding good food is a similar quest around the world.