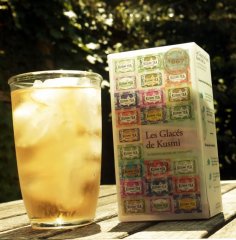 As a complete and utter caffeine addict, I found my intake of iced coffee soared as the temperature did. Deciding that being jittery and awake all the time was not an ideal life investment, I decided to get back into tea. In Ireland, where I’m from, one drinks tea when one is thirsty. We generally drink plain tea with a bit of milk and sometimes sugar. Having hot tea in the summer is not an option and I found trying to ice tea bags had mixed results. More often than not the tea would have a metallic or off-taste and needed so much lemon and sweetener that all the positive aspects of tea had been compromised.

We did a taste testing of the Kusmi tea in work and I decided to invest in a box of it. The company is 140 years old and their history reads like The Adventures of Tintin, weaving in and out of Russia, Berlin, Paris, and surviving the wars. 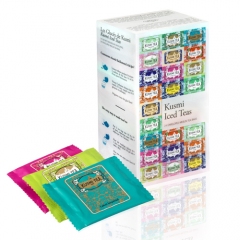 There are 24 individually wrapped teas in the beautiful frosted box. You get 12 different teas ranging from green, black, tchai and fruit flavors. The teas are specially selected for their taste when iced but are equally nice when had hot. Kumsi say “Allow 2 sachets of Kusmi tea to infuse for 3-4 minutes in ¼ of a liter of simmering purewater. Pour the infusion into a 1 liter pitcher, ¾ filled with ice cubes, and mix well. Your Kusmi tea is ready to drink!.”

But I found an even better way to do it is to maybe put a sachet into half a liter, let it cool then put in a covered container in the fridge over night. (Covered because liquids evaporate). You can even leave the tea bag in, as long as it’s not green tea because that goes bitter if it’s over brewed. This way in the morning you have strong cold tea that you can then ice and dilute. I even carry the tea around in water bottles during the day and it makes for a much more interesting beverage than water, is inexpensive and is good for you.

My favorite teas are the Imperial Label and Sweet Love. There’s definitely something for everyone in here. A few times I have put sprigs of mint and peppermint from the garden into my teas as well. They are so flavorsome though that they are excellent by themselves.

Thanks to Kusmi, I’ve curbed my caffeine addiction and found that inviting people around for afternoon ice tea is a nice and wholesome means of socializing. I’d highly recommend this to the iced beverage connoisseur. $21.95 a box of 24 tea bags

This was blog post was written by Michelle Doyle who is from Ireland and has been in the states for a few months.  She is an aspiring artist who’s interests include food, art, film cycling! She is on the staff in the store.