by andy on August 10, 2010
Several of the team members from CMB had the pleasure of touring the Mast Brothers Chocolate factory recently in Williamsburg, Brooklyn. Their sales and marketing manager, Arto, took us through the process of what goes into creating these indulgent bars.
The first step is personally selecting sources of cocoa.  The Mast Brothers source their cocoa from around the world (Madagascar, Venezuela, and the Dominican Republic primarily). Then the beans are delivered in half-metric ton pallets to the factory where they are roasted in a convection oven they bartered for from a friend with, what else, chocolate! 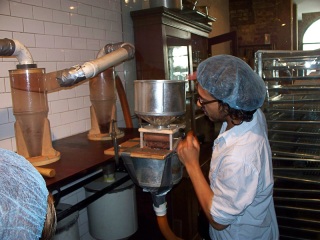 They then had someone handcraft a machine that would accomplish the next step of, cracking the beans and removing the husky outer shell. The roasted beans are poured into a hopper where they drop down into several hand-cranked rollers that crack the bean and release the “nib,” the heart of the cocoa bean.

Based on the centuries-old tradition of tossing cracked wheat into the air and allowing the wind to take away the unusable chaff thereby reserving the heavier kernel, instead of wind they use a simple vacuum which helps separate the nib from the husk and deposit them into containers. 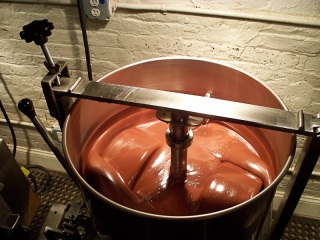 The nibs are then “conched” (heated and ground) for 3 days so the chocolate is brilliantly smooth.  Most companies extract the cocoa butter and then add it back, along with other additives-Mast Brothers do no such thing!  After the chocolate has been conched, the chocolate is then tempered (brought to a specific and ideal temperature) for appearance and consistency. 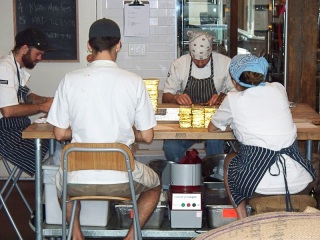 Only sugar and perhaps a defining ingredient for the bar are added (such as Serrano chili, which is a new bar flavor).  Then they are wrapped by hand in golden foil by the team.

Our visit concluded with a tasting of many of the Mast Brothers chocolate bars, including the new Grand Cru from Venezuela (a spicy, almost autumnal flavor with top notes of cinnamon)  decorated in a distinctive new teal floral paper. 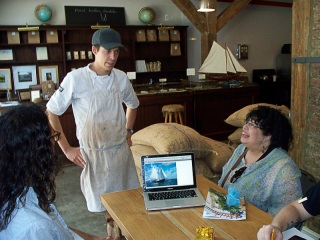 We were also inspired to hear about “Sail Freight.”  A non-profit expedition to sail cocoa beans back from the Dominican Republic without using any fossil fuels next spring, and to create a documentary about the entire experience.  You can see Karen listening to Connor, captivated by his tales of the sea and the anticipation of this great journey.

Next post: Pucker up to HOTLIPS all natural sodas!!!