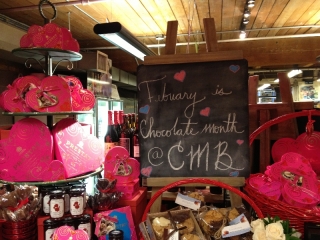 February is Chocolate Month at CMB, which is why we’re hosting chocolate-centric events, sampling a different chocolate every day in the store, and celebrating Valentine’s Day with the best chocolate gifts!  Personally, every month is Chocolate Month in my world- the majority of the recipes I bake involve cocoa powder/chocolate chips/baking chocolate- so I was looking for something extra special for our February recipe post when inspiration struck two ways!

At the end of last month, we had a visit from Sophie, the executive chef/chocolate maker of the Grown Up Chocolate Company, to the store and the Fancy Food Show. During our staff meeting, she shared about the process of taking an existing candy bar, preferably a childhood favorite, and updating it for an adult palate; the challenge is to keep the flavor profile the same while elevating the ingredients (increasing the couverture, removing the chemical stabilizers, etc).  I like the Glorious Coconut Hocus Pocus which is similar to a Mounds Bar, but might eat it with a handful of almonds since my favorite candy bar is an Almond Joy (inspiration #1). 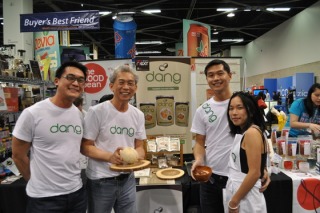 Around the same time, Vincent, the owner of Dang Fine Foods, who we met at last summer’s Fancy Food Show, emailed that his brothers would be in town and would like to come demo their toasted coconut chips.  People love DANG! Coconut Chips ($5.95, 90g) because of the texture, light sweetness, healthy snacking option, and versatility in baking. We scheduled a demo, and I knew that I wanted to incorporate the coconut chips in the recipe for February (inspiration #2). 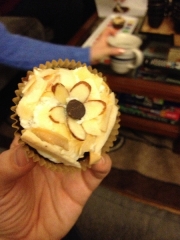 A quick search for “chocolate AND coconut AND cupcakes AND almond” led me to the blog Cooking Classy and a recipe for Chocolate Cupcakes with Coconut Frosting {Almond Joy Cupcakes}.  An hour later, I had 24 cupcakes baked and 6 decorated…they were pretty to look at and deliciously moist and textured because of the coconut chips. To review the recipe, the baked cupcake part was straight-forward, but the frosting refused to come together (and those almond sliver petals were putsy- though to be fair the original author did say that)! I’m not sure if it was because my coconut milk was so cold from the walk home and was completely separated when I began to mix it or if it remained so lumpy because I started making it in the mixer bowl and then changed to a hand-mixer, but whatever the issue, I don’t know if I’ll use coconut milk in frosting again and just stick to buttercream with coconut extract! Because the frosting was so lumpy, I was glad to be using the Dang! Coconut Chips to cover it up- they are texturally much more interesting than shredded coconut, not to mention fresher and less sugary. Also, I wanted to up the ante on the almond flavor, so I used almond extract instead of vanilla and coconut in the cake batter and frosting. Happily, even though I thought the frosting was a flop, I did send the recipe to a friend who thought the cake was one of the better chocolate cakes that she’s tasted! Not all was lost!

See you soon at the store (maybe even for the Dang! Toasted Coconut Chip Demo on Saturday, February 9th, from 1pm-5pm)! 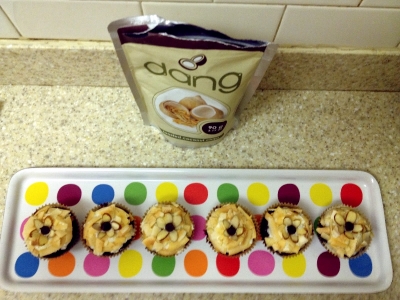