Notes from the Winter Fancy Food Show in San Francisco

I just got back from SF were it was sunny and I enjoyed sharing my family (my twin brother and sister live in the east bay with 3 nephews so I was also “Uncle” a bit) with two people whom had never been there before,  Alberto and Ana, who worked in our booth at the show. The fancy Food shows are always very busy, but I did get a chance to be a tourist, on Saturday morning at the Farmer’s Market located around the Ferry Building. It was great to see and taste all the fresh California fruits and vegetables especially the winter citrus. 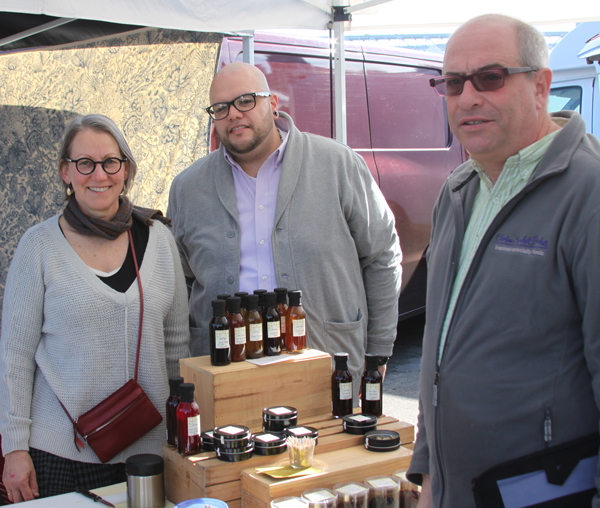 Alberto (CMB Store Manager) and I stopped to talk to June Taylor (June Taylor Jams) about her products, which have done very well in our store and we are reordering. While she makes everything by hand, she told me the real secret was starting with good produce. A few booths away there was farmer Torrie who supplies some fruit to June, and he shared some great varietal citrus to taste. When I told that I should not eat grapefruits or pummelos because of taking Lipitor, he told me the secret to a long life is eating good food and … well I cannot really say what else he said, but he and his wife seem pretty happy and healthy! Overall, it was great a California experience.

The show was very well attended, better than in the last four plus years. It is always good to see old and new friends and network with suppliers and buys in the industry. I have been going to this show for a long time or well over 20 years, and there are some things that change and some that don’t. In this show, I noticed that there are many new domestic artisan products that are coming from United States. Unlike the New York show, the California show seems to nurture more new and different products.  Also, I noticed that there was minimal representation from Great Britain and less than usual “Europe.” It seems that the bad economy in Europe is taking its toll on marketing of European foods in the US.

I was invited to be a judge for the Good Food Awards (GoodFoodAwards.org), and visited San Francisco on October to spend a whole day tasting Confections. On Friday the Fancy Food show started with the Good Food Awards’ ceremony with Alice Waters being the key note speaker. They announced winners in 9 categories and in 5 regions of the country with a celebratory reception to follow at the historic Ferry Building. These awards are different from the NASFT awards which are called SOFIE awards.  These are more stringent in terms of ingredients and sustainability and are done blindly so they do not incorporate the packaging or “marketing” of the company. There were many winners, but I am happy to say that a local guy won and was the speaker for the Pickle Category. Chris Forbes from Sour Puss Pickles accept the award for the “pickle” people which included 5 regions. Within confection the potion I judge on, a chocolatier from San Francisco won and we will be proudly carrying their product in our store in February.

At the show, we did discover new products that we are looking forward to sharing with our CMB customers. California does not just have fertile soil but it seems like a bed of innovation for artisan food products as well and many are from California: 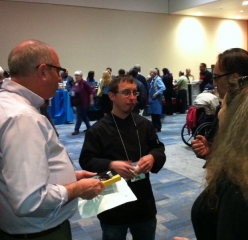 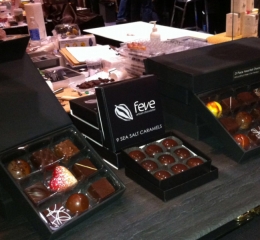 We were very pleased with the reception we got in our booth; we are lucky to start doing business with some new retail accounts along with being picked up again by old accounts. We showed a few new imported items:

Ditty’s  Irish Oatcakes imported by CMB form Northern Ireland and a great complement to all the cheese buzz that is around.

Prestat Chocolates from England and Nick Crean joined us, part of a pair of brothers that own the company and with his recent new idea.Matcha Green Tea Chocolates Thins with a hint of Earl Grey, that are in a very attractive bright green box and performed well at the show.

Grown UP Chocolates also from England and we were joined by Chef Slvie, and previewed some of the new flavors including Very Naughty Nutty Nougat and Crunchy Crispy Toffee Trilogy along with their new Celebration Box which will be available in the Fall.

Our new bent metal and burlap lined baskets which are in stock now.

I was back yesterday from California and will soon be on a plane to Cologne Germany for ISM or the International Sugar Market, which is a worldwide show that covers things mainly with sugar and much of what we sell, but before going, I am checking things out at the New York Gift Show.  Stay Tuned!

Next post: Pair Off: Tasting Event for Beer, Chocolate and Cheese

Previous post: Spice Up Your Kitchen with The Art Of Spice Blends