Most people recognize David Chang as the chef and founder of the Momofuku Restaurant Group, the man behind steamed pork buns, and a heavily accoladed talent (everyone from the James Beard Foundation to Food & Wine to Crain’s have declared his restaurants with no reservations policies worth queuing up for), but in 2011, Chang added magazine co-founder to his resume with the publication of Lucky Peach.

It is no coincidence that Chang called his magazine Lucky Peach, according to the Momofuku Restaurant Group, Momofuku translates as “lucky peach,” and the brand’s most recognizable image is a singe peach (see image at the close of this blog post). 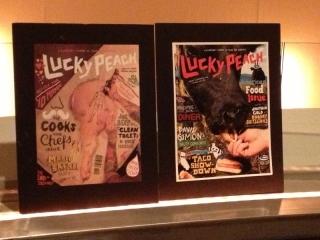 A magazine for food and culture mavens, like any Chang endeavor, Lucky Peach is boundary-expanding, quirky, and not for the faint-of-heart (Issue 3 and 4 covers of the cow eating a hotdog comes to mind and a tatooed pig come to mind). But, reading the magazine cover to cover is absolutely transporting. For the upcoming issue, arriving at CMB on November 16th (Lucky Peach, $12), which is all about Chinatown, the contributions range from Chinatown’s perceived place in culinary and cultural history, recipes from Danny Bowien, of Mission Chinese Food in San Francisco and New York, and a centerfold spread of Lo Mein from around the world. 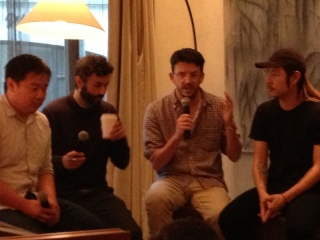 Two weeks ago, the 56th Street Round Table, the New York Public Library, and Momofuku hosted a  panel discussion about the Chinatown Issue, and the participants spoke about their Chinatown experiences and topics like: exclusivity, opium dens, crated pandas, food snobbery, dim sum, roast duck and building a food community. The participants were all uniquely qualified to speak on this subject, and included: Chris Ying, editor-in-chief of Lucky Peach, Peter Meehan, editor of Lucky Peach, Gideon Lewis-Kraus, writer and contributor to Lucky Peach, and Danny Bowien, mentioned above as Chef and Co-founder of Mission Chinese Food.  I found it particularly interesting to re-hear the opinion that the American exposure to Chinese food is so limited- there’s a reason General Tso’s Chicken and beef with broccoli are among the most popular items ordered on seamless web- they are the flavors we know.  But that is just scratching the surface, and there are so many distinct varieties of Chinese food, maybe as many as there are dialects besides Mandarin!  Chef Bowien was particularly insightful in this area, and spoke to the freedom he has making Americanized Chinese because there is so much by way of authentic flavor to draw from.  Pete Wells, in a review from the New York Times, wrote of Bowien and Mission Chinese Food: ” His cooking both pays respectful homage to its inspiration and takes wild, flagrant liberties with it. He grabs hold of tradition and runs at it with abandon, hitting the accents hard, going heavy on the funk, and causing all kinds of delicious havoc.” 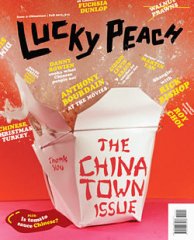 This is one of the first looks at the new issues’ cover- at the round table, the galleys were handed around, and I was struck by how unconditional it felt with the explosion of articles and titles from the takeout container.  It was interesting to see behind the cover and into the articles- listening to the panel, I understood how they developed the topic from where to get great Chinese to what does it mean to go to Chinatown; is it still the elicit, unpoliced, breeding ground of vice that is ingrained in popular culture or is a modern version of Chinatown, a complex fusion with a vibrant meeting of people, thoughts, and tastes emerging? If this issue is any indication, one thing you can be sure of, all the foodies in New York will be heading downtown, now that the lights are back on, looking for authenticity and imagination in a bowlful of noodles. 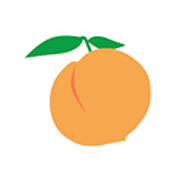 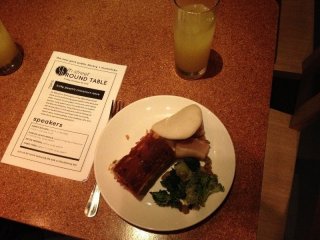 Post-script: Very fortunately for the attendees, lunch was provided by má pêche- broccoli with garlic, a sandwich of eggplant, bacon and chili jam, and of course steamed pork buns. An afternoon to entertain the mind and palate!

Post-post-script: One of the possible topics for an upcoming issue is Apocalypse- clearly Lucky Peach is not your average food magazine, but we are proud to carry this title at CMB!

Next post: CMB Chocolates to the Rescue- Sandy Hurricane Relief