It is the final week of Chocolate Month at Chelsea Market Baskets, and we’ve enjoyed visits to the store from some of our favorite chocolatiers including: Tumbador, Tu Chocolate, H.S. Chocolate Co., Akesson’s, Raw Shakti, and Comptoir de Cacao. There seems to be a recurring question from our customers at these demos, especially when it comes to the Leonidas pieces in our chocolate case: What is a “praline?”

The confusion stems from the fact that American
pralines are so different from their European counterparts.  American pralines are generally made with whole pecans (which are bountiful in the South) that are added into a warm batter of cane sugar, butter and cream.  Once they are cooled, the American praline is a stand-alone confection with a creamy consistency, similar to fudge. 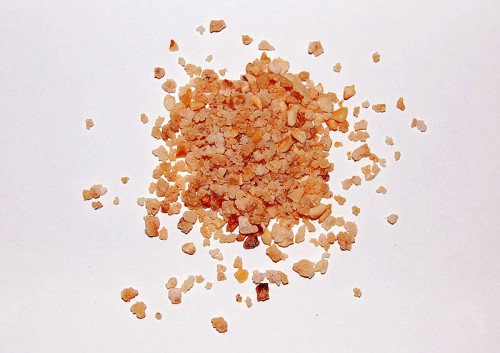 A European praline (sometimes spelled  praliné), meanwhile, generally refers to a chocolate filled with crushed, caramelized almonds called “pralin” that was developed in France (see picture at left). Sometimes a praline will designate that it is made with sugared hazelnuts instead of almonds.  This mixture is folded into a chocolate ganache which is then enrobed in a hard chocolate shell.  The connection between the two pralines (American and European) is the original caramelized nut- in both sweets you’ll get a sugary, nutty crunch!

Sometimes people will come to CMB and ask for a praline, but they don’t necessarily mean a chocolate with a crunchy, nutty filling.  This happens because the term praline has become synonymous with a chocolate bonbon regardless of the center filling!  Fortunately, our CMB staff is very knowledgeable about what is inside each chocolate in our case, so if you’re looking for a true European praline or just a sweet chocolate treat with a flavored center, you are in the right place!

P.S. If you’re interested in learning more about praline, CMB recommends the Wikipedia article entitled “Praline” (and acknowledges the article as the source for the images of pralin and American praline candies).