Chelsea Market Baskets owner, David Porat, has a regular monthly column in the WestView News, a paper that serves as “the voice of the West Village.” After travelling abroad for last month’s article, he’s back in New York! He revisits an earlier series about the bargain to be had at restaurants offering a prix fixe lunch menu, and the joy of a meal eaten at leisure in the middle of the day rather than mindless bites hurriedly consumed at a desk. 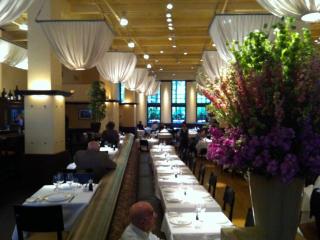 Gotham Bar and Grill has been around since the last century or 1984, to be exact, yet it remains a highly rated, modern and elegant place to eat. Jeanne & Gaston is a new restaurant but with a traditional menu that is pleasantly old-fashioned French, a charming outside garden and unique in the city. Both restaurants have a prix fixe lunch that makes them especially worth celebrating this summer.

Although they offer a prix fixe throughout the year, during the summer, Gotham Bar and Grill has a Greenmarket prix fixe that includes fresh products from the Union Square market. In addition, they have some wine choices and desserts at reduced costs. Alfred Portale started slightly after the restaurant opened and has since become well-known as a New York Chef and part owner. Dining there recently, three of us had the prix fixe and I ordered off the regular menu and can confirm that it was all very good; the prix fixe is about half the regular price and a great way to celebrate summer. The Greenmarket menu compromised, as appetizers, a spring pea soup, a salad, or a smoked salmon salad on a potato pancake in the vertical style that Gotham began and has become its trademark. I had the seafood salad which was on the a la carte menu and was similarly vertical, mild and clean tasting. 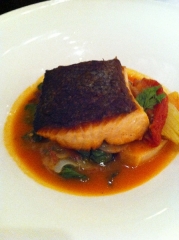 Main courses included a perfectly cooked piece of salmon, with crisp skin complemented by “fennel, sautéed greens, sundried tomato and a black olive vinaigrette” which tasted quite good, but did not exactly match the description. A further option was a grilled skirt steak, finely prepared with a salad and potatoes and enhanced with a chimichurri sauce. Also offered on that day as part of the prix fixe was Ricotta Ravioli. Dessert is extra but only $7 instead of $13 or so in the evening. The Gotham Chocolate Cake competes well in the category of best chocolate cakes in town, both flavor and texture were very evolved. 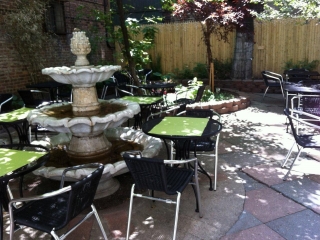 Jeanne & Gaston is the second restaurant of Claude Godard, his first is the Madison Bistro, and based on a recent evening, he does know what he is doing. He is a Frenchman, who came to New York in 1998, with a culinary lineage in his blood and developed an attachment to our city. His food is traditional with a little bend toward contemporary with a prix fix menu offered at lunch – $21 for 2 courses, brunch and in the evening $40 for 3 courses. Previously, this location housed Gavroche, a traditional French restaurant with the same back yard garden that I remember well. Sitting there, you do feel like you are away from the big city and the food romances you further away. Our first course included a seared tuna, foie gras with mango and turnips, and a tart made with sweet breads; all were good, but the winner was the developed flavor of the sweetbread tart. Our main courses were Scallops “Tarte Tartin,” Herb Crusted Rack of Lamb and “Le Bourguignon” braised short ribs in pinot noir reduction. It would be truly hard to say which scored highest, they all performed well. Dessert included a vacherin style dessert, a crepe and soufflé; all were carefully prepared French classics with a twist and food that you do not find easily in New York City.

Again, summer is a time when maybe there is more time to take time for lunch! Both of these places are about the food with dedicated chef owners and the surroundings offer good choices to eat locally, reasonably and celebrate summer.

Previous post: Summertime and the Livin’ is Easy with Lowcountry Produce