Falernum Syrup (pronounced fah-learn-um) is a new product for us; it’s from Fee Brother’s, which is the supplier of the bitters we carry.

Falernum is syrup used in Caribbean and tropical drinks, it contains more savory spices including nutmeg, ginger, vanilla and allspice($7.95). Great with rum based drinks, the consistency is thick with a translucent white color and with a concentrated flavor, a few dashes will do.

This drink syrup was developed in the 18th century and has been sited in recipes from the 1890’s.  Famous Drinks that include Falernum includes: Bermuda Rum Swizzle, Jet Pilot, Captian’s Blood Cocktail, Key Cocktail, White Lion and Zombie. 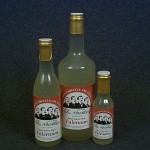 Mix all ingredients with cracked ice in a shaker or blender and pour into a chilled cocktail glass.